What is the concept of AOP?

AOP is Aspect Oriented Programming. AOP is a type of programming that aims to help with separation of cross-cutting concerns to increase modularity; it implies declaring an aspect class that will alter the behavior of base code, by applying advices to specific join points, specified by pointcuts.

What problems does it solve? What two problems arise if you don’t solve a cross cutting concern via AOP?

Aims to help with separation of cross-cutting concerns to increase modularity.

What is a cross cutting concern? A cross-cutting concern is a functionality that is tangled with business code, which usually cannot be separated from the business logic.

Other examples of cross-cutting concerns

Not a cross-cutting concerns

AOP Terminology, what is a pointcut, a join point, an advice, an aspect, weaving?

Crosscutting concerns can happen at different program execution points called join points. Because of the variety of join points, you need a powerful expression language to help match them.

It allows you not only to** extend the functionality** of existing methods but to extend the set of interfaces and object implementations dynamically. 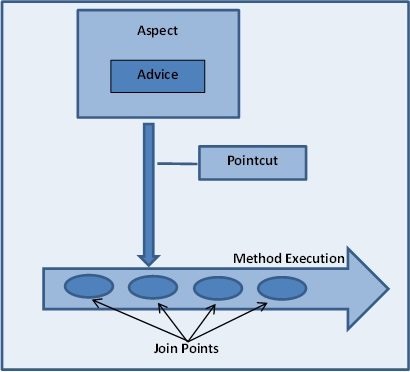 How does Spring solve (implement) a cross cutting concern?

Which are the limitations of the two proxy-types?

Both of them has the same limitation: Invocation of advised methods on self.

If a method in the proxy calls another method in the proxy, and both match the pointcut expression of an advice, the advice will be executed only for the first method. This is the proxy’s nature: it executes the extra behavior only when the caller calls the target method.

What visibility must Spring bean methods have to be proxied using Spring AOP?

How many advice types does Spring support? Can you name each one? What are they used for?

Advice: action taken by an aspect at a join point. 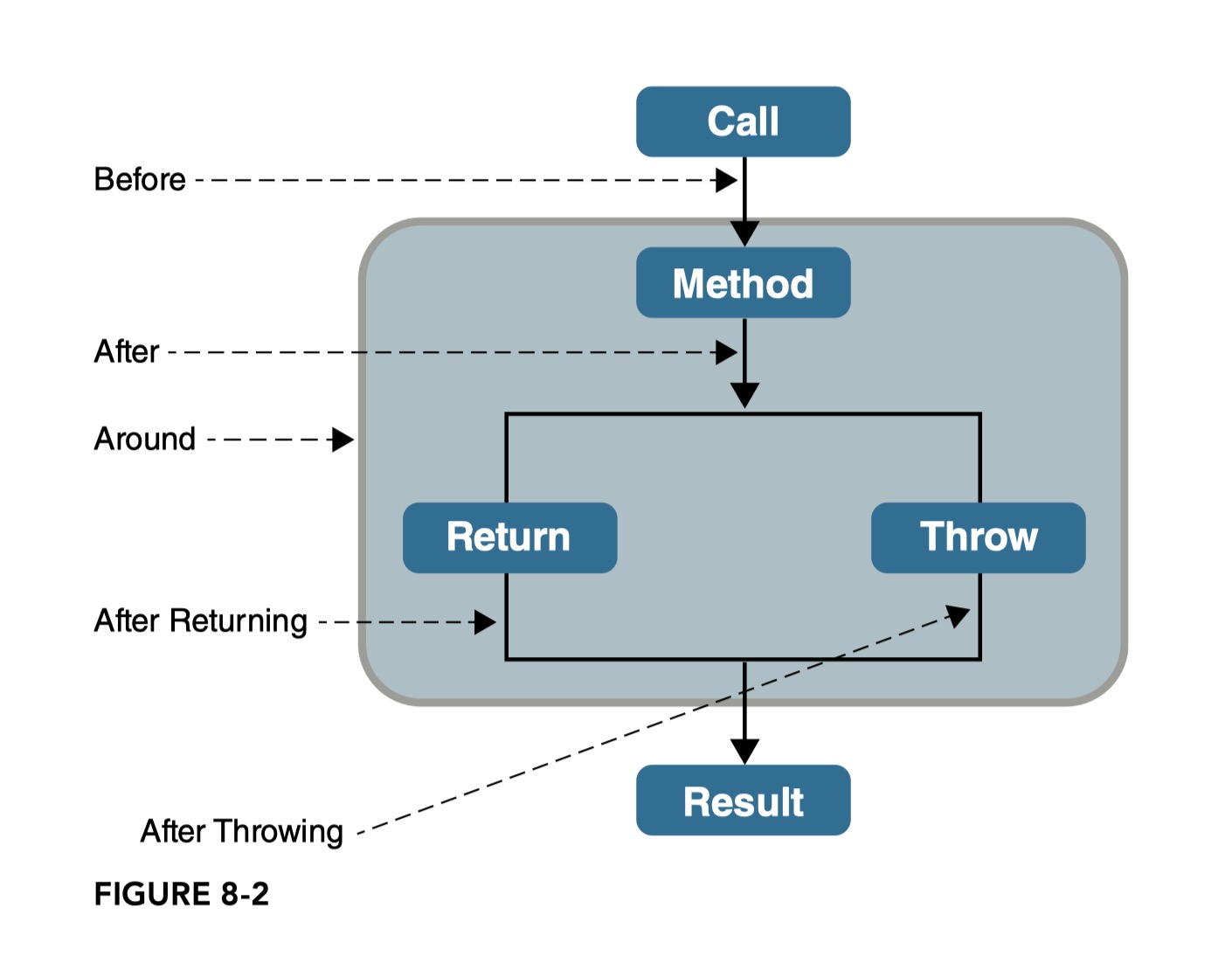 Which two advices can you use if you would like to try and catch exceptions?

What do you have to do to enable the detection of the @Aspect annotation? What does @EnableAspectJAutoProxy do?

Why do you want to use @Aspect?

Reduce duplication of pointcut expression. Aspect allows you define the pointcut once and then reference it every time you need it. The @Pointcut annotation defines a reusable pointcut within an @Aspect aspect.

After you have an AspectJ class that contains a list of methods annotated with @Pointcut, you want to wire it as a Spring Bean. Each of the methods in a @Aspect class can become an advice. If you’re using JavaConfig, you can turn on auto-proxying by applying the @EnableAspectJAutoProxy annotation at the class level of the configuration class.

@EnableAspectJAutoProxy annotation enables support for handling components marked with AspectJ’s @Aspect annotation and is designed to be used on classes annotated with @Configuration.

To enable annotation support in the Spring IoC container

Spring Boot provides a special AOP starter library that removes a little of the hassle of configuration. The @EnableAspectJAutoProxy(proxyTarget Class = true) annotation is no longer needed because the AOP Spring support is already enabled by default. The attribute does not have to be set anywhere either because Spring Boot automatically detects what type of proxies you need.

If shown pointcut expressions, would you understand them?

The basic structure of a pointcut expression consists of two parts:

For filtering according to the method signatures.

For filtering methods according to its types—like interfaces, class names, or package names.

What would be the correct pointcut expression to match both getter and setter methods?

Pointcut expression to match both getter and setter methods

What is the JoinPoint argument used for?

The ProceedingJoinPoint, an extension of JoinPoint that can be used only in around advice. It adds the proceed() method that is used to call the target method.

What is a ProceedingJoinPoint? When is it used?

Servlet Container vs. Spring Containers (not finished yet)