It provides a good overview of how networking works at all levels of abstraction. Each layer uses the layers below and adds additional capabilities. Data between two devices moves down the stack at the A side (and wrapped at each layer) … is transmitted .. before moving up the stack at the B side (and the wrapping stripped at each stage). This process is called encapsulation.

IPv4 addressess are how to devices can communicate at layer 4 and above of the OSI 7-layer model. IP Address are actually 32-bit binary values.. but are represented in dotted-decimal notation to make them easier for humans to read and understand.

Historically IP Addresses were split into classes: (including)

Class A networks were initially allocated to large organisations. Class B to medium and Class C to small businesses. As the supply of IPv4 addresses became low, the class system of IPs were related with CIDR.

IP Classes have a number of ranges within then used for private networking only:

CIDR, Classless Inter-Domain Routing is used for IPv4 IP Networking rather than the Class system. It allows more effective allocation and sub networking.

The network address is your starting point. The prefix is the number of bits the network uses, the remaining bits, the node part is yours to use. The node (or host) partis yours from all 0’s to all 1’s.

Subnetting is the process of breaking a network down into smaller sub-networks. You might be allocated a public range for your business, or decided on a privte range for a VPC. Subnetting allows you to break it into smaller allocations for use in smaller networks, e.g., VPC subnets.

Local device-to-device communication takes place using L1 (phycial) and L2 (Datalink) using Mac Addresses and Physical 0’s and 1’s. This doesn’t scale across LANs and so a methid of network-to-network transit is needed. Here comes IP Routing. IP routing is the process required to get a layer 3 packet from source to destination. It uses a series of layer 2 hops between routers to create a single layer 3 path. The method used depends on if the two devices are local, in a known remote network or and an unknown network.

IP-to-IP communications which occurs locally doesn’t use a router. ARP is used to find the mac address for the destination IP address. The IP packet is created at L3, passed to L2 where its encapsulated inside an ethernet (L2) frame. The frame is sent to the destination MAC address. Once recieved that L2 frame is removed and the IP packet passed to L3.

If Instance A wants to communicate with instance B, it can use it’s IP and subnet mask to determin if B is local. If its not, the following process occurs:

A firewall is a device which historically sits at the border between differenct networks, and monitors traffic flowing between them. A firewall is capable of reading packet data and either allowing of denying traffic based on that data.

Firewall establish a barrier between networks of differenct security levels and historically have been the first line of defence against perimeter attacks.

Waht data a firewall can read and act on depends on the OSI Layer the firewall operates at: 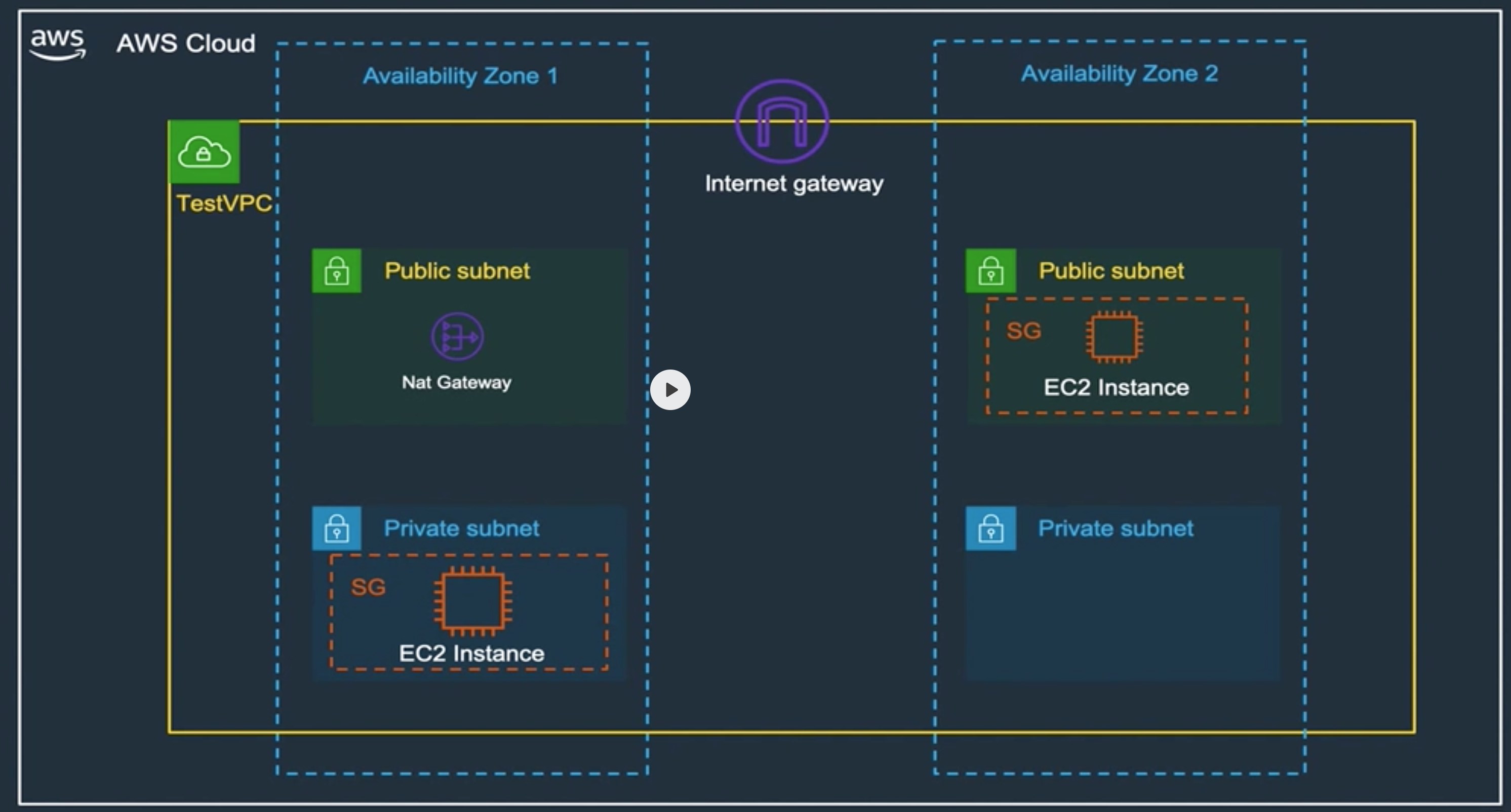 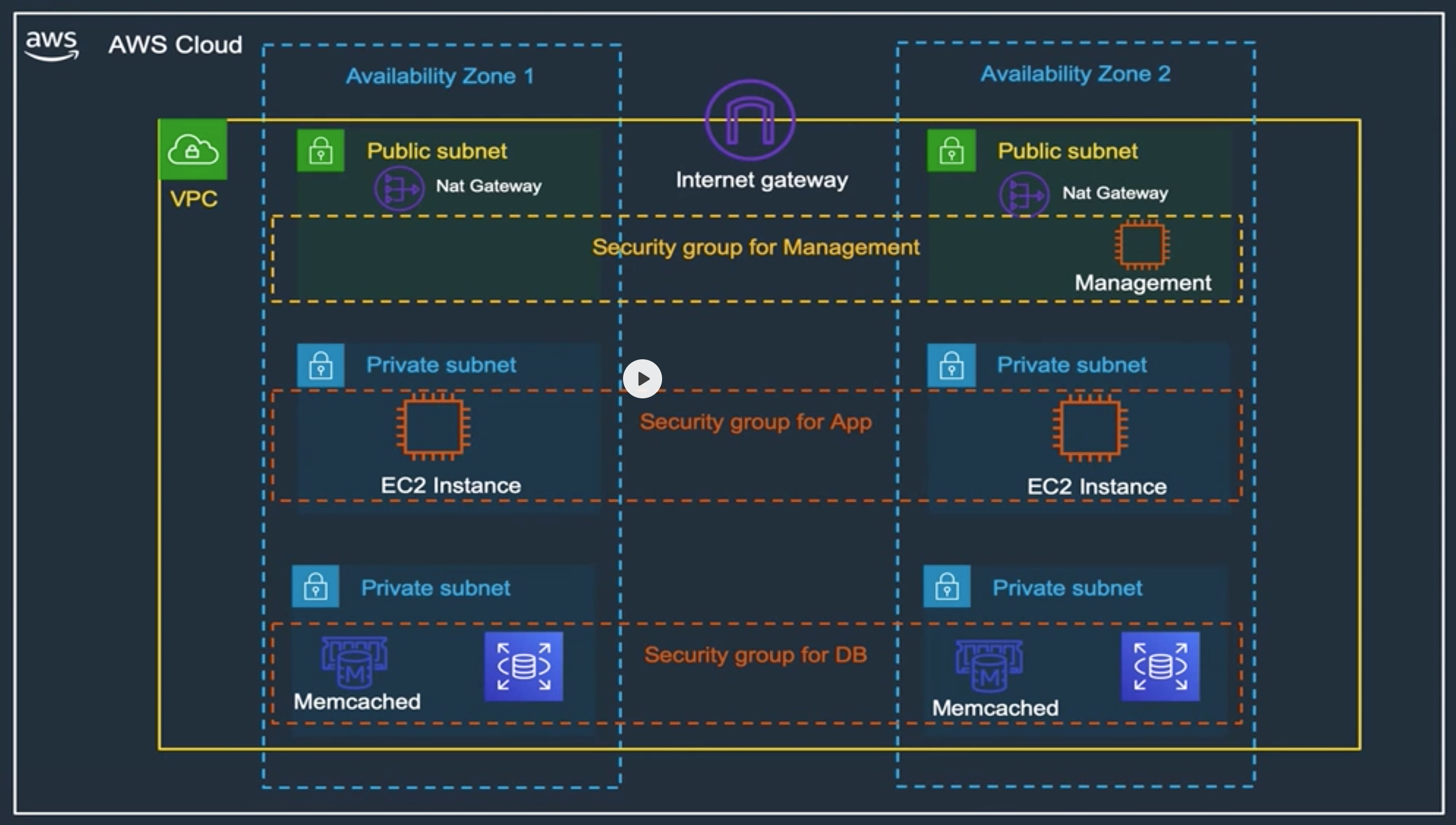 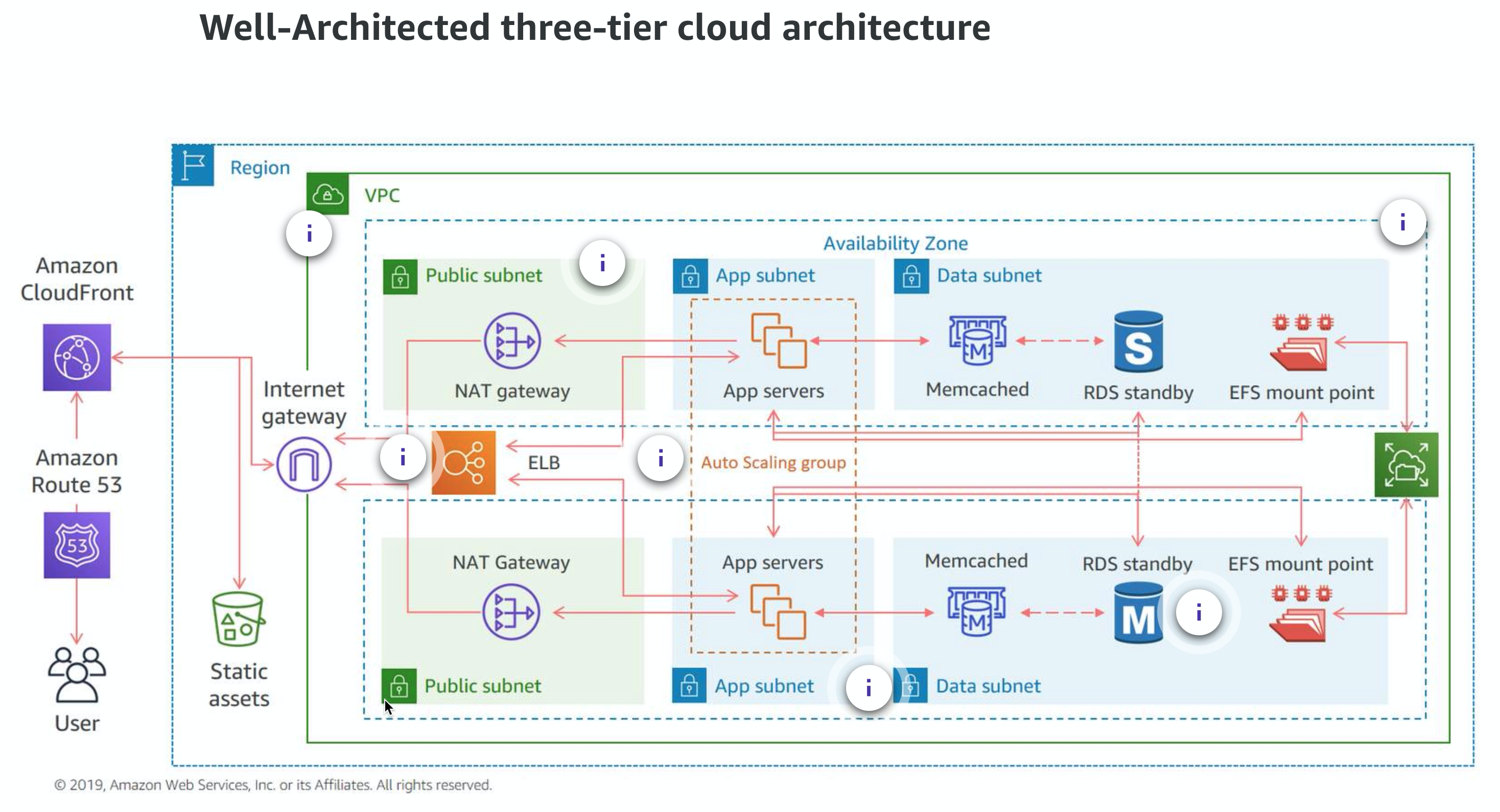 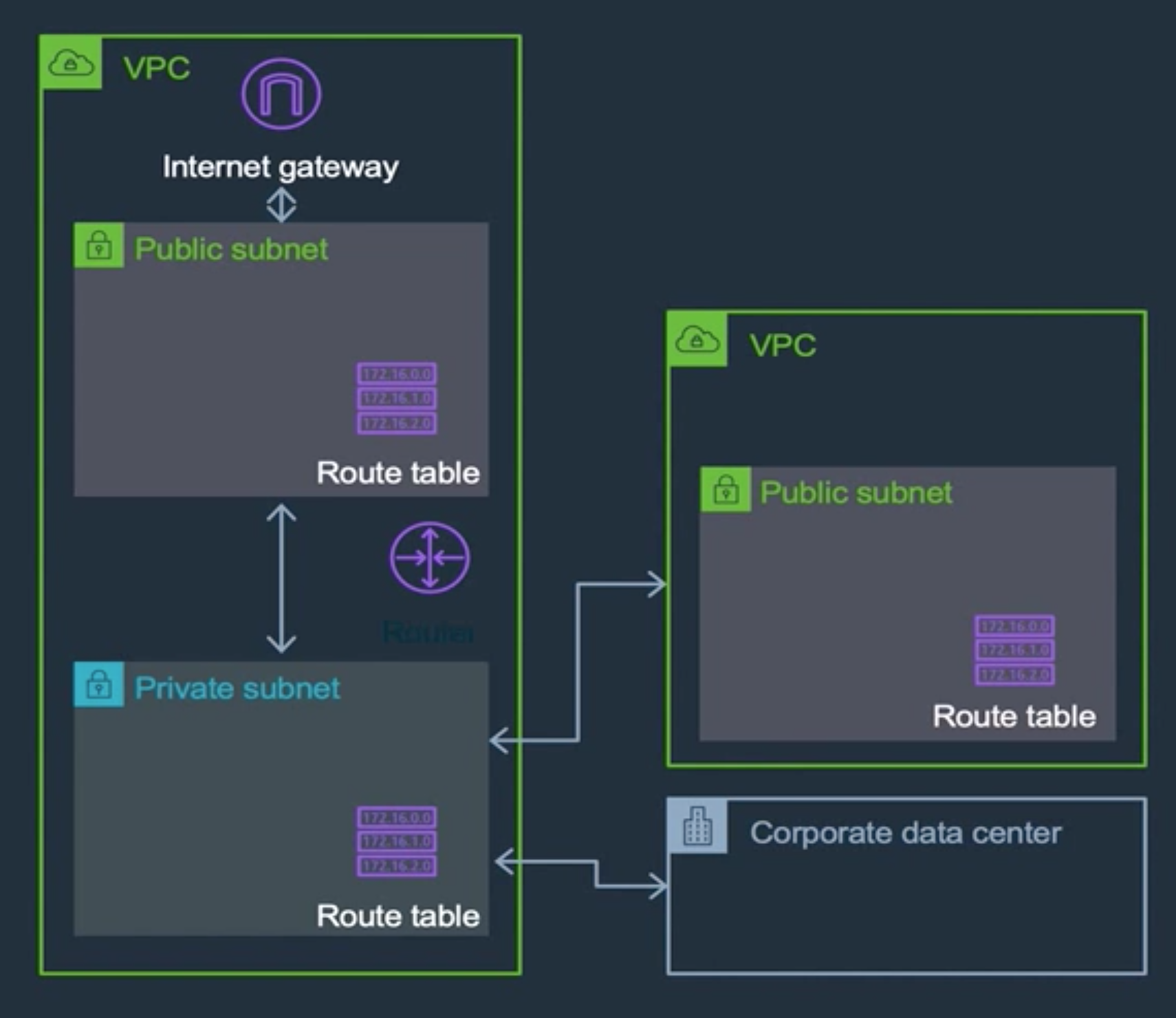 You can use a NAT device to enable instances in a private subnet to connect to the internet (for example, for software updates) or other AWS services, but prevent the internet from initiating connections with the instances. 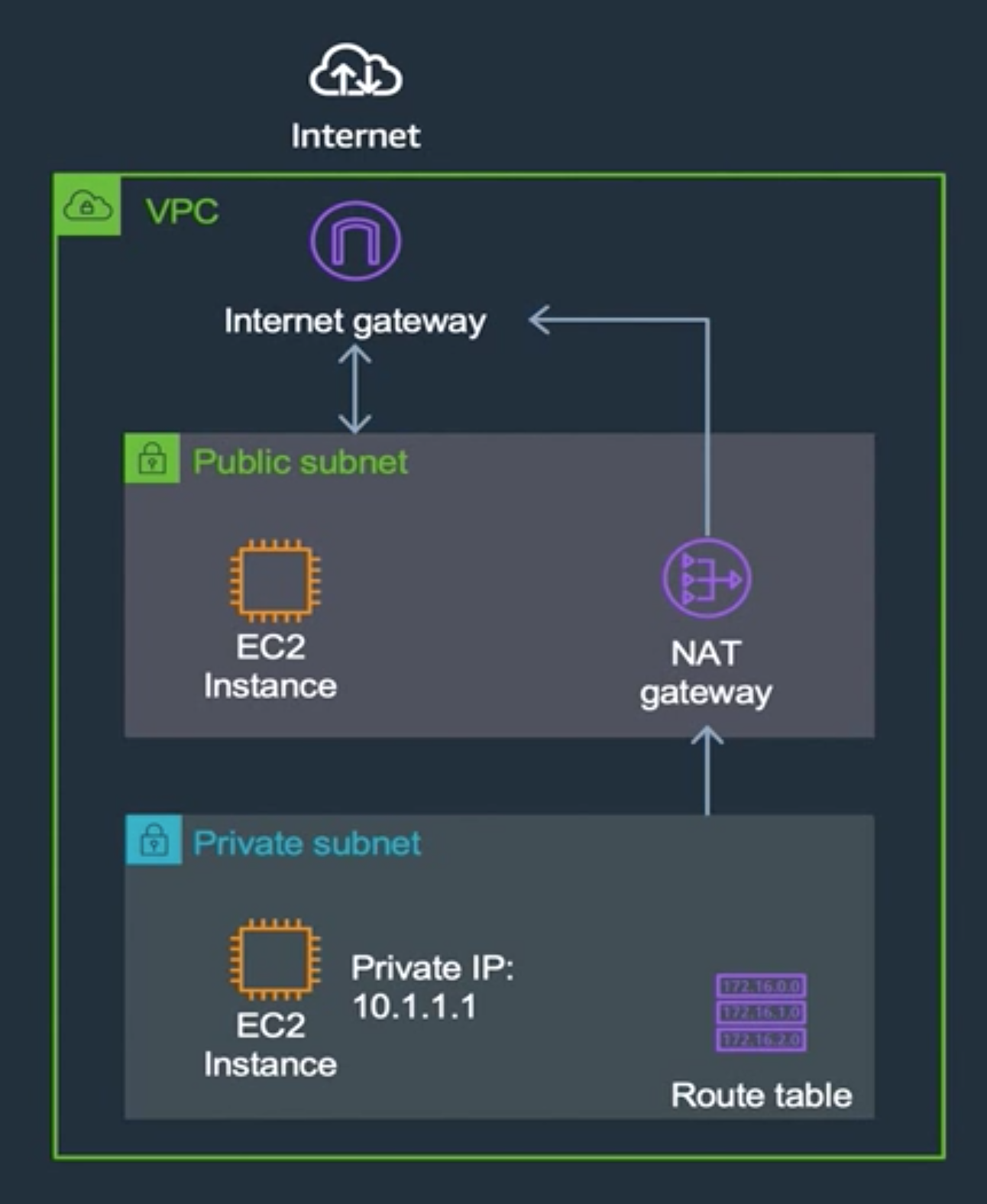 It’s a virtual stateful firewall that controls inbound and outbound traffic to Amazon EC2 instances (EC2 level). You can specify allow rules, but not deny rules. This is an important difference between security groups and ACLs. You need to config it for: EC2, ECS, ELB, RDS, etc..

It’s another layer of security that acts as a stateless firewall on a subnet level (higer than instance level).

It’s a segment of an Amazon VPC’s IP address range where you can place groups of isolated resources. Subnets are defined by CIDR blocks, are cotnained within an Availability zone. The smallest subnet that you can create is a /28 (16 IP addresses). All subnets are inside of AZs. To achive high available, you need to deploy your app into at lease 2 AZs.

Can be public, private or VPN-only.

It’s horizontally scaled, redundant and highly available Amazon VPC component that allows communication between instances in your Amazon VPC and the Internet.

An IGW provides a target in your Amazon VPC route tables for Internet-routeable traffic, and it performs network address translation for instances that have been assigned public IP address.

You may only have one IGW for each Amazon VPC.

To enable an Amazon EC2 instance to send and receive traffic from the Internet:

Allows ytou to direct Amazon EC2 host name assignment to your own resources.

It allows you to maintain a set of IP addresses that remain fixed while the underlying infrastructure may change over time.

VPC Endpoints are gateway objects created within a VPC. They can be used to connect to AWS public services without the need for the VPC to have an attached internet gateway and be public.

When to use a VPC Endpoint: 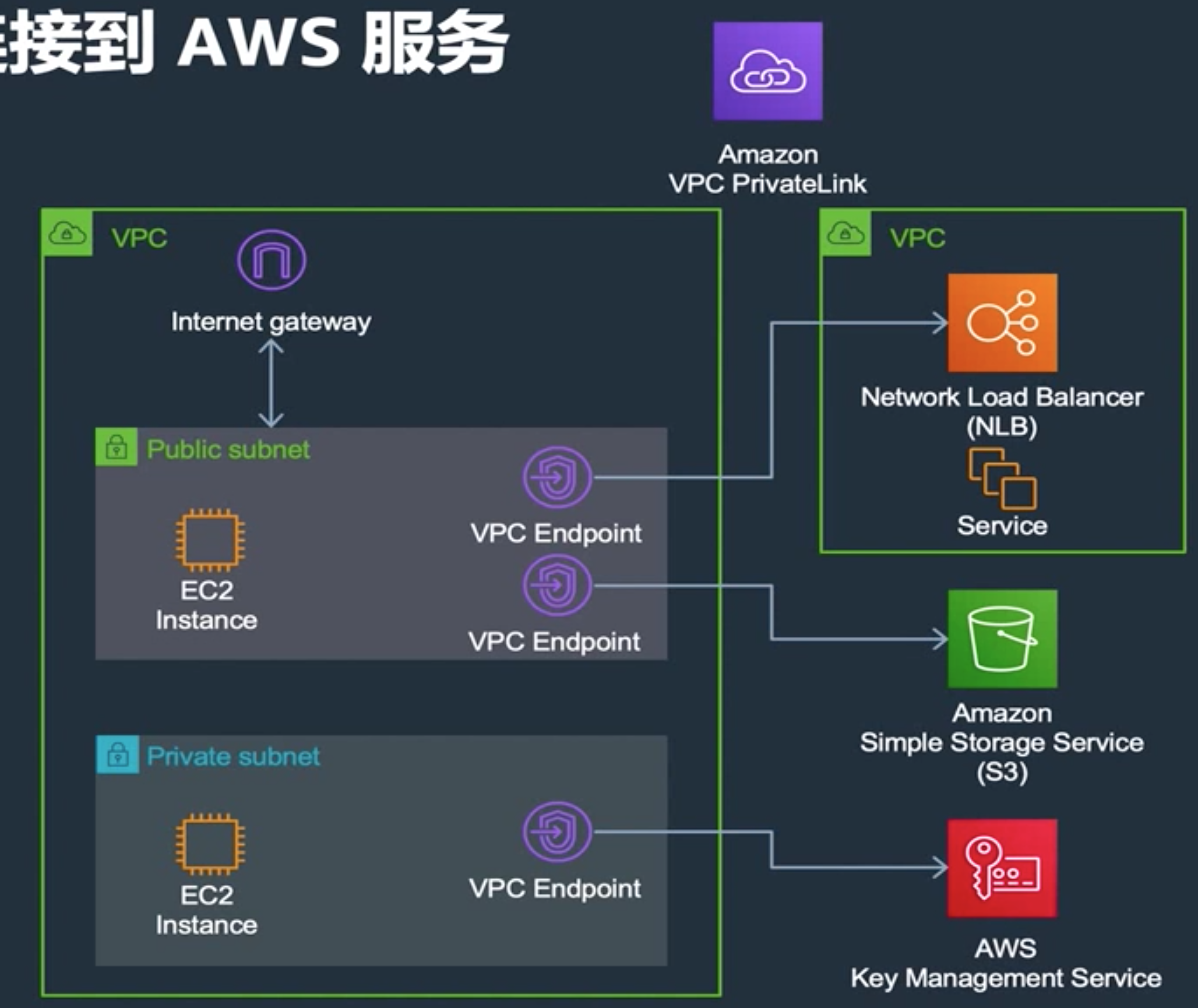 VPC peering is a feature that allows isolated VPCs to be connected at layer 3. VPC peering uses a peering connection, which is a gateway object linking two VPCs. 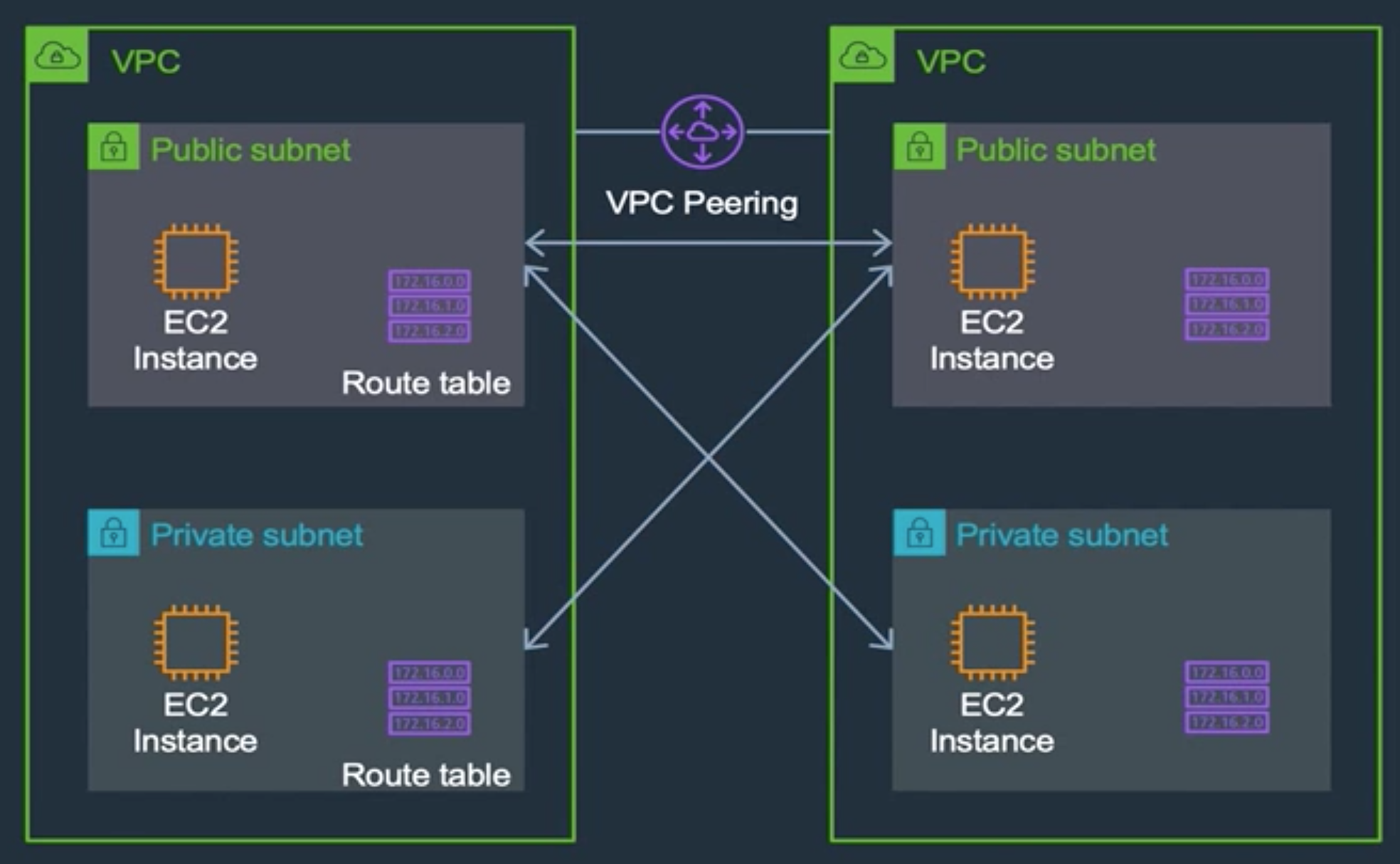 IPv6 is the next generation of IP available within AWS. It’s not fully supported across all AWS services, and it isn’t enabled by default.

NAT as a process isn’t needed for IPv6 because all addresses are public. Egress-only gateways provide this outgoing-only access that NAT gateways provide, without the incompatible elements of functionality.

Architecturally, they’re otherwise the same as an IGW.

VPC Flow Logs allows you to capture metadata about the traffic flowing in and out of networking interfaces within a VPC. Flow logs can be placed on a specific network interface, a subnet, or an entire VPC and will capture metadata fro mthe capture poit and anything within it. Flow logs aren’t real-time and don’t capture the actual traffic - only metadata on the traffic.

Flow logs don’t capture some traffic, including Amazon DNS server, windowns license activation, DHCP traffic ,and VPC router It can be enabled on a VPC, subnet, or ENI level and monitor traffic metadata for any included interfaces.

A VPN connection refers to the connection between your VPC and your own on-premises network.

Direct Connect (DX) is a high-speed, low-latency physical connection providing access to public and private AWS services from your business premises. This lesson details its high-level architecture and the key points required for the exam.

A Direct Connect (DX) is a physical connection between your network and either directly via a cross-connect and customer router at a DX location or via a DX partner.

Dedicated Connections are direct via AWS and use single-mode fiber, running either 1 Gbps using 1000Base-LX or 10 Gbps using 10GBASE-LR.

Virtual interfaces (VIFs) run on top of a DX. Public VIFs can access AWS public services such as S3 only. Private VIFs are used to conenct into VPCs. DX is not highly available or encrypted.

Chossing between Direct Connect (DX) and VPC VPN is a critial part of any connectivity-based example questions.

Content can expire, be discarded, and be recached. Or you can explicitly invalidate content to remove it from caches.

By default, CloudFront is fully publicly accessible - anyone with the DNS endpoint address can access content cached by the distribution.

A distribution can be configured to be private where each access requries a signed URL or cookie. This is done by setting the trusted signers on the distribution.

Private distributions can be bypassed by going straight to the origin (e.g., an S3 bucket).

An origin access identity (OAI) is a virtual identity that can be associated with a distribution. As S3 bucket can then be restricted to only allow this OAI to access it - all other identiteis can be denied.

It supports all content that can be served over HTTP or HTTPS, including:

By default, CloudFront caches a response from Amazon S3 for 24 hours (Default TTL of 86,400 seconds). If your request lands at an edge location that served the Amazon S3 response within 24 hours, CloudFront uses the cached response even if you updated the content in Amazon S3.

use linuxacademy.com as an example. The domain name system (DNS) does many things, but the common use case is to turn DNS names into IP address - like turning linuxcademay.com into 52.86.183.13. It’s a distributed system - no one part knows all.

Registering a domain with DNS in Route 53

A zone or hsoted zone is a container for DNS records relating to a particular domain. Route 53 supports public hosted zones, which influence the domain that is visible from the internet and VPCs. Private hosted zones are similar but accessible only from the VPCs they’re associated with.

It determines how Amazon Route 53 responds to queries:

A node is placed in each AZ the load balancer is active in. Each node gets 1/N of the traffic, where N is the number of nodes. Historically, each node could only load balance to instances in the same AZ. The reuslts in uneven traffic distribution. Cross-zone load balancing allows each node to distribute traffic to all instances.

An elastic load balancer can be public facing, meaning it accepts traffic from the public internet, or internal, which is only accessible from inside a VPC and is often used between application tiers.

An elastic load balancer accepts traffic via listeners using proteocol and ports. It can strip HTTPS at this point, meaning it handles encryption/decryption, reducing CPU usage on instances.

Classic Load Balancers are the oldest type of load balancer and generally should be avoid for new projects.

Application Load Balancers (ALBs) are devices that operate at Layer 7 of the OSI network model — understanding the HTTP/S protocol. In addition, ALBs introduce a number of advanced features that result in a cost reduction, performance increase, and added flexibility. ALBs are, in most cases, the recommended load balancer to use for projects.

NLBs are the newest type of load balancer and operate at layer 4 of the OSI network model. There are a few scenarios and benefits to using an NLB versus an ALB:

They allow you to configure various configuration attributes that can be set include:

Launch templates address some of the weaknesses of the legacy launch configurations and add the following features:

When you launch a new EC2 instance, the EC2 service attempts to place the instance in fllowing ways:

Auto Scaling groups allow EC2 instances to scale in a way that allows elasticity. When used in conjunction with load balancers and launch templates and configurations, it allows for a self-healing infrastructure that can also scale based on demand.

Auto Scaling groups can be configured to use multiple AZs to improve high availability. Unhealthy instances are terminated and recreated. ELB health checks or EC2 status can be used.

Metrics such as CPU unilization or network transfer can be used either to scale out or scal in using scaling policies. Scaling can be manaul, scheduled, or dynamic. Cooldowns can be defined to ensure rapid in/out events don’t occur.

Scaling policies can be simple, step scaling, or target tracking.

Debug a SQL performance issue (aka, how to read a query plan)

aka, how to read a query plan

Use AWS X-Ray in Lambda

Convert unit between metric and imperial in Java